What Have They Gotten Themselves Into?

Hiya, Welcome back to PEP! Happy Late St. Patrick’s Day! I don’t know if I’m Irish or not, I’m awaiting results from a DNA test with Ancestry. But I have been to Ireland and would totally go back in a heartbeat. I loved it there, I could see myself living there for a few years. Perhaps not permanently, I am American, and the United States of America is my home, but I wouldn’t mind living in Ireland for a few years. If, for whatever reason, I couldn’t stay in the USA, Ireland is definitely my second choice. What about ya’ll? What country other than your native country would ya’ll want to live in?

This week’s question: If you won the Lottery, what would you do?
My answer: Now, this might not be the best answer. But first, I would pay off my debt. I have student loans as well as a couple of credit cards and my current car payment from an accident a few years ago. Once I’m completely out of debt, I would buy the property and build the home of my dreams. Or rather, the ranch. I can already see it, am actually already designing it. Once it’s built, I would begin my own business. I have a couple running already, Imaginative HandiCrafts and Paula’s Pet Paradise; but I have one, or rather two in one, more in mind. I’m not going to go into detail about it here, I don’t want to jinx it’s future. Perhaps on a later date, if it’s getting going or I’m making progress on making it a reality. I will say that it deals with food and my baking I’m doing each week is practice for it. Then, any that remains, I’ll invest some and put the rest into savings, minus what I’m living on if necessary, and focus on the businesses and my writing as I will be published eventually. That may not be the most fun answer, but it’s what I’d do, along with perhaps a few fun purchases just because.
What’s your answer?

This week’s baking and cooking: This week’s cooking, the Five-Minute Hula Hula Coleslaw was actually really good. I’d never thought of putting fruit in a coleslaw, that just seems horrible. But it wasn’t, the pineapple and mandarin oranges added just the right touch without being overly sweet or juicy. This next week’s cooking: Spicy Southern Hot Corn promises to be just as good but I’ll keep you updated per usual. I baked Cookies and Cream Cupcakes and Peek-A-Boo St. Patrick’s Day Cake that were both good. They were both moist and the frosting on both were really fluffy. The cake was supposed to have a shamrock inside of it, but I don’t have a shamrock cookie cutter. I did have, in a spring cookie cutter set, a sheep and since sheep are often connected to Ireland, I used it instead. Pictures are below as well as on my Instagram. I really need to start remembering to take pictures of the cooking. I’m just not one to take pictures of my meal before I eat it whereas I take pictures of each baking for my Instagram. I’ll try to do better from here on out. Next week’s baking will be Chocolate Chip Cookie Cheesecake Bars. They sound really good, here’s hoping they’re better than the last bars I baked. 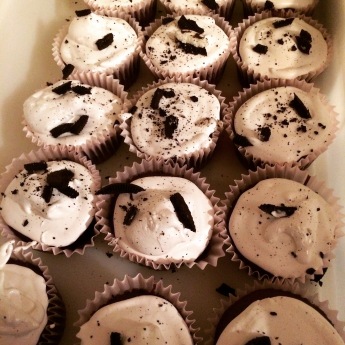 This week’s writing: a continuation of Cheryl’s Adventures.
Cheryl’s driver dropped her and the twins off at the airport. They were meeting the other five at the gate.
“Let’s go. We don’t want to miss our flight. The next one won’t be until tomorrow and it’ll already take a day of our allotted time to get there.”
The twins nodded, silently following Cheryl. It didn’t take too long before they were through security, checked in, through the gate and on the plane, meeting up with Izzy, Kenny, Nica, X and Lori along the way.
Once the flight was underway, Lori turned to X, “You ready for this? You’re essentially returning to your homeland.”
“Not that I’ve ever actually been there. Actually, no one of my family has been back since the immigrants that came to the US, that was 12 generations ago.”
Cheryl remained quiet, the bit more she’d translated of the book since X had handed it over to her three days before; she was worried about if they would all return from this trip. And if they did, would they all be sane or broken?

“Geez, you’d think they’d make those tin cans more comfortable for flights more than three hours.”
Nica grinned as Izzy stretched her back and Sam commented, “They are better accommodating for flights over three hours. Remember the plane we originally got onto before the transfer at O’Hare?”
“Yeah, that thing was a bucket. But still.”
Scott chimed in, “We had more comfort than some considering we were in first class, thanks to Cheryl.”
Izzy had to concede the point as Cheryl pointed out their ride to the hotel for the time being, X’s family having long since sold their property here.
Once they were at the hotel and dropped their suitcases off, they gathered in the girls’ room for the next step in the plan.
“Well, it’s noon here.”
“Shouldn’t it be midnight? The flight took a day, right? Or about that?”
“Yes, but Indonesia is 12 hours ahead of us in Oklahoma. So back home, we’d still be asleep, or going to bed, as it’d midnight on Saturday. However, here, it’s noon on Sunday. So we probably just need to get a feel for the city.”
“Village, you mean.”
“Hey, there are more people here than there are in our town in Oklahoma.”
“Fair enough.”
“Then, we’ll get an early start in the morning. Prepare to hike as we’ll going into remote places, so also pack your backpacks tonight after we pick up what we couldn’t bring.”

The next morning, before it was even light in Ambon, they were outside the hotel, waiting for their ride to the outskirts of the city.
“Just how far are we going?”
“The driver’s agreed to take us an hour out of the city, to the jungle. After that, we’re on our own.”
“And this’ll get X his family fortune back?”
“If we follow all of the steps I’ve translated, yes.”
“How?”
“I’ll explain that as we go along.”
“Why are you holding back?”
“I don’t want you making your decision based on what I tell you. It needs to be on what you see once we’re there and what your gut says.”
“This isn’t going to be easy, is it?”
“Not even.”
© Paula Crofoot

Monday Motivation: When the sun is shining, I can do anything; no mountain is too high, no trouble too difficult to overcome.

Writing Prompt: I actually have a visual prompt for you this week.

Music I’m listening to as I’m posting this: Intimacy: The Corrs-Talk On Corners.

← Road Trip, or rather, Flying Time!
Was This Really the Way to Win Her Heart? →