A Miniature Universe is What you Make It

Hiya, Welcome back to PEP! I know I said February’s focused posts would be focused on baking but I’m simply not inspired by that today. So, instead: I’ll be talking about my newest hobby, Miniatures. By miniatures, I mean doll-size furniture, accessories, doll-houses and of course dolls.

I have plans for a large universe. It’ll have a city with all the stores you can imagine, including many chains that we all know and love/hate as well as city staples like a zoo, banks, fire stations, police stations and the like. It’ll need homes as well of course, which will include a farm, a ranch, condos, Victorian homes and more architectural styles. There is no limit to the universe, it’s mine after all, so I’ll also building fantasy places like Harry Potter; Teen Titans, X-Men and other DC/Marvel places, Disney, Nickelodeon, Cartoon Network(Old shows), as well as universes from various movies I enjoy. This will take me several years but it’ll be fun and I love working with my hands so I’ll enjoy figuring out the construction of the buildings and land. They’ll all need transportation as well, not to mention vehicles like the bat-mobile, the Hogwarts Train. [Can you tell that I’m a geek yet? I’m not ashamed.] I’ll probably eventually have a room in my dream home that I will be building just for this universe. All these ideas of places to build alongside the city is why I’ve developed a Miniature Universe rather than simply a Miniature City. I think I’ll also include capital cities of various countries, including my own country of United States of America. It’s my universe, like my writing, the only limit is my imagination. I’m also going to include the realms of my books in my universe, after all, they’re mine so there’s no reason to not build what is already in my mind. There’ll also be, I think, a few different sizes as there’s the small 1:20, the slightly larger Barbie size, which I still have all of my old Barbie dolls and accessories in storage, and the even larger American Girl size so there’s no reason to limit the Universe to only the tiny or only the barbie size or only the American Girl/Baby dolls size when all can be used. This’ll be fun.

I already have a doll-house, though it’s still in the box and I haven’t actually built it yet. I don’t have room where I live currently so it’s in the closet but I’ve been meaning to build it for years. I also have a paper doll house that I built a few years ago that’s currently packed in a box. By paper doll house, I mean the house and furniture is made of nothing but paper, glue and tape. There’s also a van that I made out of paper and a mayo jar. It actually looks like a house and is fairly functionable if you’re careful with it. 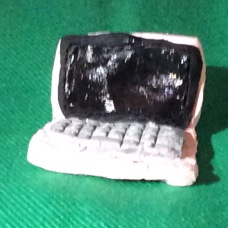 However, while I don’t have room for the houses yet, that doesn’t mean I can’t get started on furniture, accessories and the like. I’ve already built, as you can see above, a daisy tea-set and a pink laptop. The laptop is actually inspired by my own and the tea-set is one I wouldn’t mind owning myself. I have a little bit of a boost on making miniatures out of clay as I took Pottery 101 in college and still remember it. I still have that pottery, actually. I really enjoy working with clay, it’s fun to take a block of bland clay and see what comes out of it. I also have a Doll-house hobby on my Pinterest that I’ll be working through, including DIY on a lot of different aspects of the doll houses. It’s a public board so you’re more than welcome to look at it and get your own ideas.

I’m also going to be making fairy gardens and including fairies in my universe. I have a pot already that I’m going to use for a small fairy garden as soon as I get the proper clay. I have Sculpey Clay, which I highly recommend, but you need air-dry clay for the fairy buildings that are built around items like soda bottles and that, I don’t have. I also need it to make some of the furniture I’ve got in mind for the rest of the universe as I’m going DIY and using small boxes and the like to form a base. So, that’s in progress, waiting for extra funds to buy the air-dry clay.

I will definitely keep ya’ll updated on this universe as I build. And if I do something that you want to know how I did it, let me know and I’ll write up a how-to for ya’ll. And that goes for anything that I post on here that I’ve done.

Blowing the doors off traditional publishing.